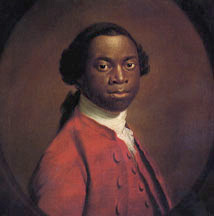 Olaudah Equiano or Gustavus Vassa was living in what is now Nigeria when he was captured from his village at the age of 11 and sold into slavery. He wastaken to Virginia as a slave. He was eventually sold to a ship’s captain and travelled widely. After 16 years as a slave he managed to save enough money to buy his freedom. He came to England and wrote a book about his experiences, called The Interesting Narrative of the Life of Olaudah Equiano or Gustavus Vassa the African, written by himself. It was published in 1789, became a best-seller which turned many people against slavery.

There is a plaque outside St Andrew’s Church: 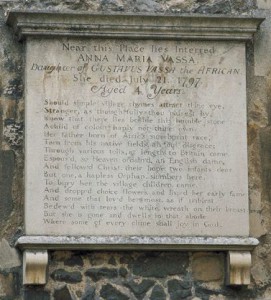 Should simple village rhymes attract thine eye,
Stranger, as thoughtfully thou passest by,
Know that there lies beside this humble stone
A child of colour haply not thine own.
Her father born of Afric’s sun-burnt race,
Torn from his native field, ah foul disgrace:
Through various toils, at length to Britain came
Espoused, so Heaven ordain’d, an English dame,
And follow’d Christ; their hope two infants dear.
But one, a hapless orphan, slumbers here.
To bury her the village children came.
And dropp’d choice flowers, and lisp’d her early fame;
And some that lov’d her most, as if unblest,
Bedew’d with tears the white wreath on their breast;
But she is gone and dwells in that abode,
Where some of every clime shall joy in God.

Links to other resources